Look, in the sky, what is that? Is it an exit scam? Total incompetence? Mixture of both?

Peepcoin was some sort of privacy coin. I don’t know. Anonymity of assets or something. Maybe I’m dumb but sounds like the same old shit to me. Apparently in February, “the community” decided that it’d be good to fork it and rebrand to “DAPS”.

Alrighty, fair enough, and it actually seemed to get everyone fairly exited. There would be a 1 to 1 swap for anyone holding Peepcoin and everyone would happily move along.

Check out this chart! I mean, who wouldn’t buy it? It is literally better than everything else in almost every way!!! OMG!!!

I’m not sure what happens at these meetings. I’ve had some dumb ideas in my day but usually other people in the room will say something like “No Father, that is a dumb idea” and then we all move on. These ludicrously dumb decisions continue to be made though, like the time Savedroid faked an exit scam for “the benefit of everyone”.

The Peepcoin/DAPS cartoon captains decided that the original developer of Peepcoin had too many peeps and would benefit too greatly from a 1 to 1 swap to DAPS. What was the solution? Cancel the swap all together of course!

Owners of Peepcoin had obviously been accumulating for no other reason than to swap it to DAPS and they were met with a bombshell announcement.

We have some hard news to announce today. We've decided that the only responsible course of action is telling you, our community and family, as soon as we have a plan. Please read through the announcement here: https://t.co/zw93pu41vS pic.twitter.com/80AktzKQY9

The community was obviously extremely pissed. Especially this guy Steve….

FUCK YOU @DAPScoin FUCK YOU!

Here’s what subsequently happened to the price….

Ahh, but don’t worry! Quickly after completely tanking their own price with one of the most boneheaded articles of all time, they changed their mind!

After our last announcement, the community was clear with what they wanted. The DAPS-Peepcoin 'swap' will not be cancelled, but changed to airdrops. The 1st Peepcoin snapshot was 06/27/2018 0300 UTC. If you held Peepcoin before then, you've now got DAPS. https://t.co/3DuBjIl5Ds pic.twitter.com/HscuKaWUFU

At this point you might think…but hey, what about those people that sold their peeps when they found out they were worthless? Well, those people are fucked. Not to mention if the old developer they were trying to avoid giving DAPS to wanted to, he can just buy dirt cheap Peepcoin and join the damn Airdrop.

Hey guess what? If you invest in any company with cartoon avatars named Captain Diapers and Capricorn Candy, you’re taking a pretty big risk.

Also, not sure if this is actually from the team but if you see advertisements like the one below for anything other than bars in the red light district, run the other way.

Was this an exit scam? I don’t know. Did they really not know that telling everyone their Peepcoin was officially worthless would cause a massive selloff? Seems hard to believe, but who knows. No matter what the deal is, you’re asking to lose money if you continue to invest in this team. What a bonkers move.

I honestly have to give them an A. This is some diabolical genius level stuff. Best way to rob someone is to leave them wondering if they even got robbed. 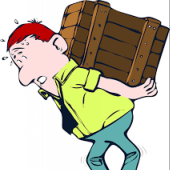