Disclaimer: I am invested in CPX token and continuing to do so in the future. This post is not to be interpreted as financial advice. Do your own research.

Apex is a platform for enterprises that aims to increase business marketing effectiveness, data quality, and customer loyalty. The aim is to power the users by giving them a chance to monetize their own data. The user’s data can be utilized by using the NEXUS customer data platform, made by Chinapex, the same company behind Apex.

Apex made a big u-turn after conducting their ICO, when they decided to switch from using Neo to creating their own blockchain. This decision may have seemed like the right move after Neo experienced some serious FUD from a post on The Store of Value Blog in November. As an investor, I think it’s awesome that Apex is creating its own blockchain.

By making their own chain they have more ways to be innovative and make the platform specific for their use-cases right from the start, thereby creating more value for the ecosystem. Blockchain development has been ongoing since early February, the testnet deadline is Q4 2018, and the mainnet will be going live next year. More detailed technical information about their own chain will be in the new whitepaper. The new website and whitepaper should be released before CPX is listed on the LBank exchange.

If still missing a suitable blockchain, the project is not short of leadership. The CEO Jimmy Hu has, in my opinion, been a true professional in the handling of the ICO. As expected with a hot project, things went south during the ICO when the Apex website got hijacked. Apex refunded anyone who lost their money in the incident. The team was prepared for difficulties. It’s a good sign.

When it comes to professional leadership, Jimmy is only the beginning. He and Tiger Yang, the co-founder of Apex, have worked in marketing and built internal analytics for Microsoft. Then there’s Richard Wang, the CTO of Apex, who worked as a tech leader in Microsoft before he was a director of engineering in Alibaba. You should also review the list of the project’s advisors. Big boys working on big things.

Apex has a strong network of big brands around it.

You just know when things are right, that’s the feeling you get from Apex’s telegram group. They listen to what the community has to say, which will be of great value in the long term. For example, CPX (Apex’s token) exchange listing was delayed by a month because of the overall market conditions. #neverforgetMarch2018 The little things show that the team working on Apex has a good sense of the game they are in. They also have a list on their website that explains the nature of their partnerships. You don’t see this for most crypto companies. No need to shill on baseless rumors.

Realistically, Jimmy Hu envisions that by 2020, there are hundreds and thousands of brands running the Apex platform. Safely saying he thinks tens of millions of users across the world will use the app. These users would be more tech-savvy people who are interested in how the digital world works. In terms of growth, they are looking to scale as fast as possible, but not at the expense of the health of the ecosystem. The regulation part will be very important, and at first it will be centralized and administrated by Chinapex and Apex, but later it’ll be fully community driven and regulated.

Apex is a promising project with a lot of opportunities and a strong foundation. However, it’s coming to a turning point in the sense that the new whitepaper will give a raw estimate of what the Apex chain will look like. I’m excited, but also ready to pick up CPX in exchanges close to ICO price, which in these overall market conditions is a cruel but somewhat realistic estimate. During these red days, I want to remind you fellas, as Jimmy Hu said in an interview in December:

“Some cryptocurrency tokens are definitely in a bubble, but blockchain technology is not even near a bubble, it’s just in its infancy.”

You can get a deeper understanding of Apex and its CEO Jimmy Hu by watching this exciting and bullish interview with BlockchainBrad. As Stated earlier, since the interview the fact has changed that it won’t be built on Neo, and instead be built on its own blockchain. Also see Apex’s website. 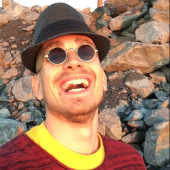 Eximchain Review – A Blockchain Project for my Masters Class