Psychology is one of the most defining characteristics in all people. How the brain works, how it functions and especially how it affects behavior in people, depending on the context of the situation, are all parts of what makes us, us. The Psychology behind the way we think affects our decisions heavily, especially in regards to investment and all things financial. Our brains are tailored, through Cognitive Bias, to operate at a high level when it comes to making decisions and judgements in our everyday lives. This happens so much, we don’t even know we are doing it.

Yes, emotions can play a big part in how we think, but what about how we look at things? What about how our brain can play tricks on us? As a new writer here, I wanted to delve into something a bit different which affects us all in our day to day lives and pertains, especially, to Cryptocurrency. A lot of the Crypto world (and our world as a whole) is specifically tailored to get you to do certain things through tailored mechanisms, whether generated by our own brains or other people. I intend to bring you the various facets of the psychology of investment and Crypto in this multi part series.

My hope that you gain something and, most importantly, learn from the various topics.

Let’s get into it, shall we?

Let’s take two investors, CryptoBrit and CryptoDave. They both made the same investment into Ethereum. Over the course of one week, the Global MarketCap rises 20% but the Ethereum investment only rises by 8%. CryptoBrit cares only about the investment return and frames this as a gain of 8% in her brain. CryptoDave however has other ideas in his Crypto addled brain. He compares the investment gain in Ethereum against the Global MarketCap and frames this as a loss of 12% overall.

At this point, which investor is more likely to be happiest with their investment? Let’s see how the gains and losses affect our two investor’s next decisions.

CryptoFrog tweets at them and says “Wutup fam? I got this great ICO that I think will moon hard. It’s finna rain lambos on yo face piece. Ya’ll down?”

CryptoBrit reads the tweet over and decides to investigate further. CryptoDave, stuck in his loss frame perspective is willing to take a risk and dumps out some Ethereum for this ICO without doing his due diligence. In fact, half his investment into Ethereum goes into this ICO. CryptoBrit, happy with her gains, is more cautious and decides to bow out. Well that ICO CryptoDave invested in was Prodeum and CryptoDave lost half of his initial Ethereum investment and was left with the word “penis” on the company website to remember the burn by.

How about another example?

A few days ago, I tweeted a poll on twitter (shown below).

Out of the 26 votes, 77% chose the “80% lean ground beef”, and only 23% chose the “20% Fat ground beef”. The funny part about this? They are both one in the same. It’s more about how the question is presented than anything else.

We can also pose a similar question in regards to pricing in Crypto.

“The ProExodusium project has reached 60% of its targeted transaction rate in its Testnet.”

“The ProExodusium project has failed by 40% of its targeted transaction rate in its Testnet.”

Statistically, most people would choose option A because of the way the data is described. In reality, the numbers are still the same and the data has not changed. As an investor, I don’t want to invest into anything that has a 40% failure at the stage of its current Testnet. As a data conscious investor, I should always be looking at both sides of the presented information (even if one side isn’t presented at all). Granted, there are also a ton of other factors that go into investing in ICOs, but what we are showing here is how the information is delivered and tailored.

Here’s another example of the framing effect:

“Ripple is a great currency to buy, because the data is centralized. This promotes adoption of Blockchain and catapults us into the forefront of business.”

“Ripple is a horrible currency to buy, because the data is centralized. This is against Satoshi’s vision and will ruin us all in the long run.”

“EOS has raised $2 Billion so far in its ICO. This is great because the project is going to receive the appropriate funding it needs when the Mainnet.”

“EOS has raised $2 Billion so far in its ICO. This is horrible because the project has received all this funding and hasn’t even launched its Mainnet.”

Notice in both examples, the actual data is the same. ‘Ripple is centralized’ and ‘EOS has raised $2 Billion. The project has not yet launched a Mainnet’. The way it’s tailored however, affects the reader’s perspective when making a decision about a certain project.

Some of you might be saying at this point: Okay d1rty, I see your point, what do I do about it?

Here’s what you can do to combat the framing effect:

The moral of the story here is that in a social media/internet driven environment such as this one, investors should never fully rely on the packaging of blogs/articles/news posts/social media posts/etc. to get the full scope of what is going on with Crypto as a project, or as a whole. 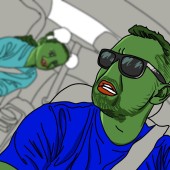 I’m a Cryptocurrency investor I don’t day trade, swing trade or do TA I’m employed in the IT field & am technical oriented I’m human so I don't always talk Crypto I don’t give financial advice, DYOR I do want to help empower others & newcomers freely I also want to promote positivity and self growth through my interactions